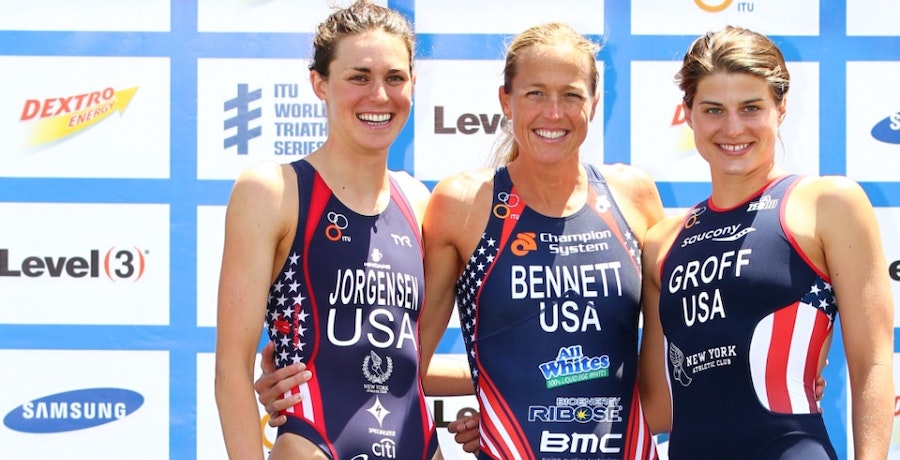 With less than three weeks until the Olympic Games kick off in London, the 2012 U.S. Olympic Triathlon Team has officially been announced by the U.S. Olympic Committee.

While the qualified athletes were known after the World Triathlon San Diego race, the team was officially confirmed by the USOC on Tuesday. Representing the U.S. in the women’s triathlon on August 4 in Hyde Park will be two-time Olympic qualifier Laura Bennett (Boulder, Colo.) and first-timers Sarah Groff (Hanover, N.H.) and Gwen Jorgensen (Milwaukee, Wis.).

Four-time Olympian Hunter Kemper (Colorado Springs, Colo.) and Manuel Huerta (Miami, Fla.) will compete in the August 7 men’s triathlon. In all, the USOC announced a 530-member roster for the 2012 Olympic Games.

“It is an incredible honour to represent the USA in the Olympics. To be able to wear USA across my chest is something I will never forget,” Jorgensen said. “I’m excited to be a part of something that brings not only the USA together, but the entire world together.” Sarah Groff (30, Hanover, N.H.)
Groff placed seventh at the 2011 London ITU World Triathlon Series event to clinch a spot on the 2012 U.S. Olympic Triathlon Team. She went on to finish third in the ITU WTS rankings for the first-ever overall series podium finish by an American. Groff led the U.S. with five top-10 finishes on the WTS circuit in 2011 and was seventh last month at the ITU World Triathlon Kitzbühel for her first top-10 showing in 2012. 2012 U.S. Olympic Men’s Triathlon Team:
Manuel Huerta (28, Miami, Fla.)
Huerta was named USA Triathlon’s Elite Athlete of the Year for 2011 and capped his season with a silver medal at the Pan American Games. He finished the year as the No. 3 American in the ITU World Triathlon Series rankings and was the top U.S. men’s performer at the London and Kitzbühel WTS stops. The Cuban-born Huerta earned his Olympic berth with an emotional ninth-place finish at the May 12 ITU World Triathlon San Diego. Since qualifying for London, Huerta has recorded top-five ITU finishes in Dallas and Edmonton.

Hunter Kemper (36, Colorado Springs, Colo.)
One of just three athletes to qualify for all four Olympic triathlons, Kemper is the top U.S. men’s finisher in all three previous Olympic triathlons with a top showing of seventh in Beijing. Hampered by injury for much of the past three seasons and racing for the first time in seven months, Kemper delivered a fifth-place finish at the 2012 ITU World Triathlon San Diego on May 12 to claim his fourth Olympic berth. He owns U.S. men’s records with seven career USA Triathlon Elite National Championship titles and four career ITU World Cup victories.