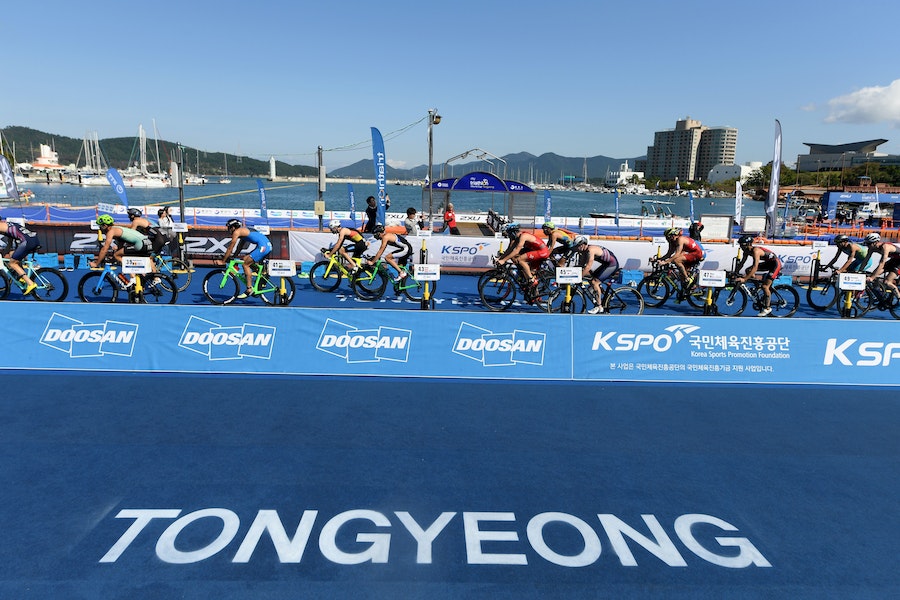 On Saturday 30 October 33 elite women and 48 elite men will line-up to race for World Cup points and rankings, remaining in the 2021 season, across the sprint-distance race format.
Follow the athletes and the races on TriathlonLIVE.tv with the women starting at 0900AM (local time) and the men following at 1130AM.

WOMEN’S PREVIEW
World Triathlon Cup Tongyeong elite women’s race will set off from the shores at 0900AM local time on Saturday 30 October. The athlete line-up features the likes of Olympians, World Cup specialists and new athletes on the international stage.

Japan’s Niina Kishimoto will lead the women onto the pontoon in Tongyeong. Kishimoto finished 8th in the World Triathlon Cup Haeundae last weekend. Great Britain’s Beth Potter, gold medallist in last weekend’s World Cup and training partner Kate Waugh, silver medallist in Haeundae, are among the race favourites leading into this weekend. Potter and Waugh led the elite women through the swim in last weekend’s World Cup and will be looking to execute the same set-up in Tongyeong, with the aim to establish an early breakaway on the field and run for the medals.

Sandra Dodet of France won the 2019 World Cup here in Tongyeong and, after the event being cancelled in 2020 due to the pandemic, will be motivated to claim gold once again, across the challenging and tactical sprint-distance course.

The course features a 750m swim (1 lap), 20km bike (3 laps) where athletes will ensure a challenging hill and descent and closes with a 5km run segment which includes a steep hill to tackle twice.

Australia’s Olympian Emma Jackson, brings a wealth of World Triathlon race experience to the start line, will be among the women to watch on Saturday, after having a solid hit out last weekend in Haeundae. Jackson will be joined in Tongyeong by fellow team mates Charlotte McShane and rising star Emma Hogan. All Australians raced in Haeundae last weekend so have had a week in Tomgyeong to familiarise themselves with the race conditions and course.

Italy’s Bianca Seregni, Spain’s Xisca Tous and Italy’s reigning Junior World Triathlon Champion Beatrice Mallozzi, all powerful cyclists, will be looking to make contact with the lead group and be in line for medals.

Emilie Morier (FRA) arrived in Tongyeong this week, having not raced in South Korea before. Morier is a strong performer on the World Triathlon Championship Series circuit and it will be exciting to see how the talented French triathlete will tackle the sprint distance race in Tongyeong.

Bermuda’s Erica Hawley had the best race of her career in Haeundae last weekend, crossing the line in 13th position and the member of the ASICS World Triathlon team will be fixed on moving up in World Triathlon Cup rankings.

Korea is well represented on the women’s start list with 11 athletes racing.

MEN’S PREVIEW
The men’s race in Tongyeong will start at 1130AM local time on Saturday 30 October. The line-up of athletes includes Olympians, World Cup champions, sprint specialists and motivated new athletes to the World Triathlon stage.

Japan’s talented Jumpei Furuya, 2021 Asia Triathlon Championships Hatsukaichi bronze medallist and fifth across the weekend last weekend in Haeundae will be a man to watch. Furuya was looking sharp on course last weekend, across all segments and will be relying on a blistering run leg, up and down the iconic steep hill, to get on the podium in Tongyeong.

The men’s field has some fierce competition with Italy’s Nicola Azzano who secured the bronze medal in Haeundae last weekend and Italian compatriot Michele Sarzilla and 2021 ITA Triathlon National Championships silver medallist. Italy’s Delian Stateff has landed in Korea in incredible form and is known for his power on the bike, which could be just what it takes to break up the field and win in Tongyeong.

Mexico has 5 elite men racing in Tongyeong and among the star power is Olympian Rodrigo Gonzalez, a strong athlete on the World Triathlon stage. Gonzalez produced the second fastest run split in Haeundae clocking, 14minutes57seconds across the 5-kilometre course. If Gonzalez can stick with the leaders from the start, his pedal and leg power could ensure him a top spot and on the podium in South Korea.

Gabor Faldum and Tamas Toth, Olympians representing Hungary, bring incredible experience into the field and no doubt will work together, to be among the leaders on race day.

Frenchmen Simon Viain and Antoine Duval are looking for a taste of World Cup triumph and will be eager to race up front and hold onto medal positions.

Just like in the women’s race, Korea is well represented on the men’s start list with 11 athletes racing.

Follow the athletes and races on TriathlonLIVE.tv on Saturday, elite women from 0900AM KST and elite men at 1130AM.