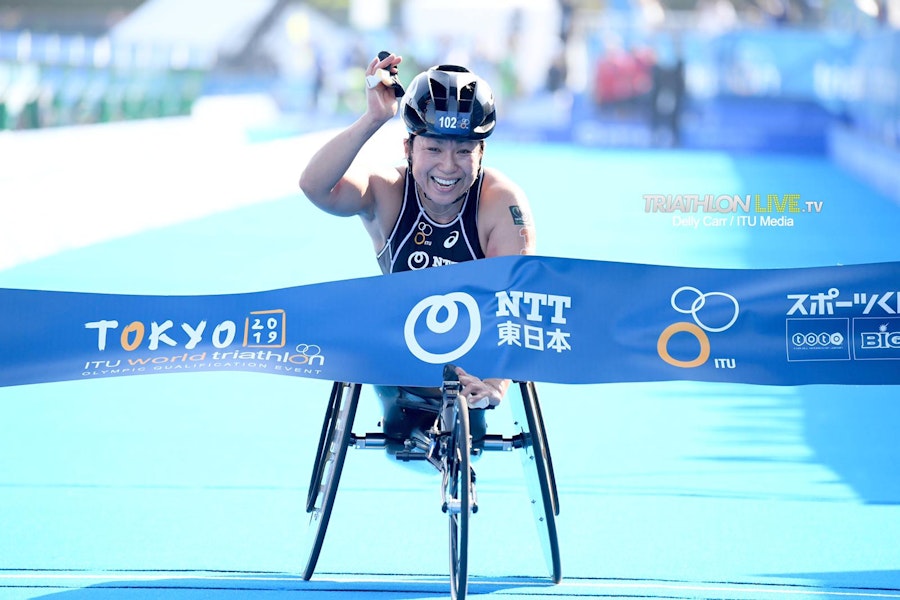 Under the beating Tokyo summer sunshine, Saturday morning was the paratriathletes’ turn to sample the Odaiba Bay course twelve months ahead of Tokyo 2020. With the race format switched to a duathlon due to water quality issues, the athletes were competing over 2 laps on the run (1.25km), 5 laps on the bike (20km) and 4 laps on the run (5km), and the action was fast and furious.

PTWC
The wheelchair athletes were out onto the course early, Ahmed Andaloussi of France the first man up the ramp from transition and out on to the opening segment, Japan’s Jumpei Kimura following him out before Joe Townsend (GBR), Pier Buccoliero (ITA) and Joshua Sweeney got underway (USA). Andaloussi had managed to add ten seconds to his start over Townsend and the Brit was forced to recover from an early puncture, but that distance shrank with every passing lap. By the time they were out of T2 the race was Townsend’s, almost 3 minutes quicker than Andaloussi on the handbike and that left him out of reach for the final 5km run, Buccoliero coming home third.

In the women’s race, Tokyo-born Wakako Tsuchida H1 headed out on her own for the first throws of the run with Emily Tapp H1 (AUS) in close pursuit for the first 2 laps. Onto the handbike, Tapp seized her moment, knowing that the former para-marathoner would undoubtedly be strong over the final stages. Having passed the home favourite and put a good 20 seconds into that lead, the 5km finale was all Tsuchida’s, powering home more than three minutes quicker than her rival to take the tape, Tapp followed over the line by compatriot Lauren Parker.

PTVI
The visually impaired races were led out by USA’s Kyle Coon, but he was all too aware of the talent waiting in the second wave, reigning World Champion Dave Ellis B3 and USA’s vastly experienced Aaron Scheidies B2, who was narrowly beaten by the Brit on the Gold Coast last year. Ellis had put a minute into Coon’s advantage by the end of the opening run, only for Scheidies to ramp up the pressure over the bike. There was little to choose between first and second coming into T2, but the final 5km was all about the British pair’s resilience, rounding off a near-perfect race in 16:39s to take the gold, Scheidies finishing just seconds ahead of Jonathan Goerlach (AUS) in third.

The women’s race saw Canada’s Jessica Tuomela B1 pull herself back into contention after Britain’s Melissa Reid B3/exp:tag_this} had flown through the first run segment. Tuomelo’s strength on the bike was again evident as she saw out a tight finale, turning over the result from Magog to take a hard-earned gold under testing conditions. Ukraine’s Vita Oleksiuk holding on to take an excellent bronze.

PTS5
A stacked men’s PTS5 line up saw Canada’s Stefan Daniel seek to take control early on while behind him Germany’s Martin Schulz, Alexandr Ialchik of Ukraine and Antoine Bess (FRA) were locked into a battle before George Peasgood (GBR) hauled his way back into contention with a superb bike segment. Once back onto the final 5km run, however, the race was Daniel’s. Putting in a time of 15:19s, there was nobody in the field that could match that pace, the World Champion sealing a great performance on the Tokyo 2020 course, Schulz and Peasgood coming home for silver and bronze respectively.

The women’s race then saw Grace Norman of USA and Britain’s Lauren Steadman side-by-side over the first 1.25km before the Brit, who looked refreshed having been out of racing for much of the year, began to assert herself after a rapid first transition put her out in front alone. Claire Cashmore was able to close up some ground over the bike but Steadman was once again imperious over the run having clearly enjoyed her first taste of a circuit on which she will have her heart set on producing a similar performance in a year’s time, Cashmore in second, Alisa Kolpakchy (UKR) third.

PTS4
The men’s PTS4 had an unexpected finish when the leader throughout the whole race, Alexis Hanquinquant (FRA), miscounted the laps in the last segment of the run and crossed the finish line with one more lap still to go. By the time he realised and was back on the circuit to complete the last lap, Mikhail Kolmakov (RUS) had caught up and was able to take the tape. USA’s Jamie Brown completed the podium thanks to a splendid bike leg.

In the women’s race, victory went to USA’s Kelly Elmlinger, who managed to handle the hot and humid conditions better than the rest of the field and claim her third win of the season. Behind her were local Japanese hero Mami Tani and Sharon Dagg from New Zealand in third place. Pre-race favourite Hannah Moore (GBR) pulled out on the last run segment after a magnificent bike had put her into a clear lead.

PTS3
With Korea’s Hwang Tae Kim the only PTS3 athlete on the circuit, it was a perfect opportunity to sample the Tokyo 2020 conditions without pressure, his opening run of 09:30s followed by a 35:56s bike and 21:14s for the final 5km.

PTS2
USA’s Hailey Danz gave herself the perfect preparations for a Paralympic campaign, winning after the woman who beat her to the gold at Rio 2016, Allysa Seely, pulled out of the race. Normally more of a power cyclist, Danz adapted well to the demands of the technical city circuit, albeit still being outshone by Britain’s Fran Brown, the Brit delivering the fastest ride by four minutes. Danz’s impressive run sealed gold, however, leaving Brown to take the silver and Finland’s Liisa Lilja the bronze.

Hailing from a swimming background, the USA’s Mark Barr may not have had an opportunity to test himself over the swim, but nevertheless will have taken plenty of positives from his time out on the Tokyo 2020 course. Up against Japan’s Kenshiro Nakayama, the American put in a rapid opening segment before Nakayama reeled him in on the bike, only for Barr to put more than three minutes on his rival over the final 5km to earn the gold.