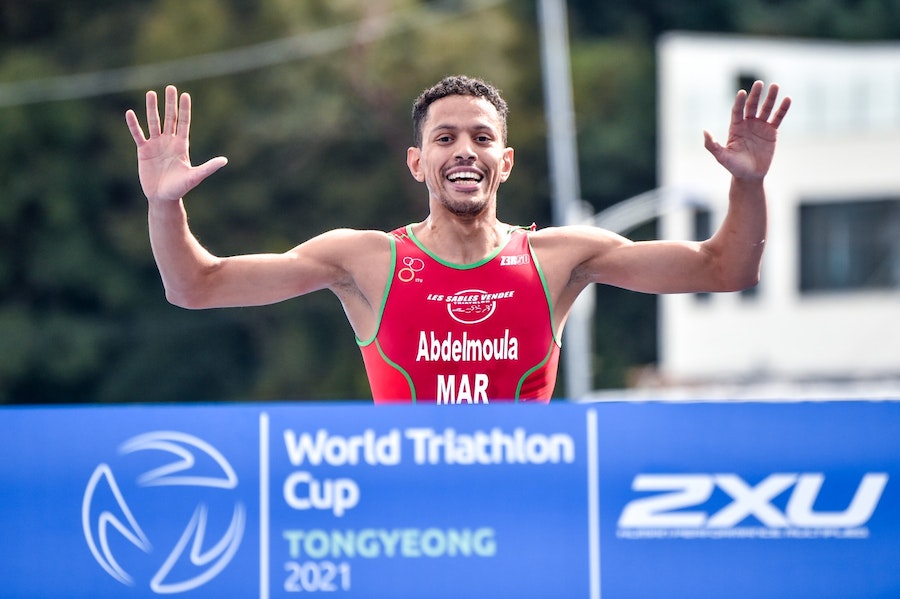 Jawad Abdelmoula was with the leaders for all of today’s World Triathlon Cup Tongyeong and as he moved onto the run, the Moroccan established an incredible gap, on the entire field, to win World Cup gold. Abdelmoula, a former runner and new to the World Triathlon scene, was thrilled to take top step on the podium in Tongyeong today.

Italy’s Alessio Crociani and Australia’s Max Stapley opened up an initial gap, to lead the final strokes of the 750m swim in the World Triathlon Cup Tongyeong.

In the early stage of the bike course, the elite men formed a strong six-person group, 10-seconds ahead of the next group of athletes. Max Stapley of Australia led the charge but it wasn’t long before the two front groups had formed one giant train of over 20-elite men, hunting for World Cup triumph.

There was a lot of bike and run power in the main group of athletes and the hilly course was surely testing the best of them. The group powered across the 20km course together and on the final lap, Japan’s Ren Sato attempted a breakaway.
A group of 10 elite men were established and working well together, 30-seconds down on the leading athletes.

The leading group charged into the second transition together and, with slick transitions, bolted out onto the 5-kilometre run course. This fierce group now had opened up the gap to 45-seconds.

Almost immediately on the run, Jawad Abdelmoula took control to lead the race. Abdelmoula, a former runner, who has only competed in five World Triathlon races to date, worked hard up the hill each time to keep the momentum going, extending the gap after each lap.

The Moroccan triathlete kept looking over his shoulder but with no men in sight, continued his surge. No other athlete on course could match his run speed today.

Abdelmoula looked smooth as he entered the finish chute and glided comfortably down the blue-carpet, to win gold in the 2021 World Triathlon Cup Tongyeong.

Italy’s Alessio Crociani, who stuck with the leaders all day, claimed the silver medal in Tongyeong.

“I like this place, it’s a good training area. I love Tongyeong,” Crociani said.

“I was coming into this race, after a few doubts, especially after last weekend in Haeundae. I was looking forward to finishing my season with a strong race. I am over the moon with a podium, it’s my first podium of a World Cup and it’s given me confidence for next season and next Olympic cycle,” said Cabrera.