It’s part of the family, Together We Tri

Father and son, Andrés Otero Forero and Simon Otero, represent Colombia and Australia respectively, as age-group world triathletes. As father and son, they train, travel and do triathlon together! #TogetherWeTri

Father and son Andrés Otero Forero and Simon Otero, migrated to Australia, from Colombia, 11-years ago. Andrés was into adventure racing and Simon was already a competitive swimmer. In 2010 they both decided to join a triathlon club, buy road bikes for the first time and venture into the sport of triathlon.

The first event they trained for together was at Lake Nojiriko, Japan. With years of swimming, riding and running experience under their belts, they now aim for start lines all over the world, where they represent different countries, as age-group world triathletes. Father Andrés Otero Forero, 44-years of age, and son Simon Otero, 23-years old, represent Colombia and Australia respectively.

They line up at international events, including the 2018 ITU World Triathlon Grand Final, Gold Coast, motivated to give their best and embrace the experiences. As father and son, they train, travel and do triathlon together!
“As a World Triathlete, I look forward to meeting other triathletes from my country, as well as triathletes from around the world. It’s an honour to represent my country in triathlon, ” said Andrés Otero Forero.

“The triathlon community is a major part of my life, it is basically my second home. It means a lot, I started triathlons after I migrated to Australia with my family, it is very special to be representing a country which has shaped me into the person I am today and that has given my family and I great opportunities over the years, ” told Simon Otero. 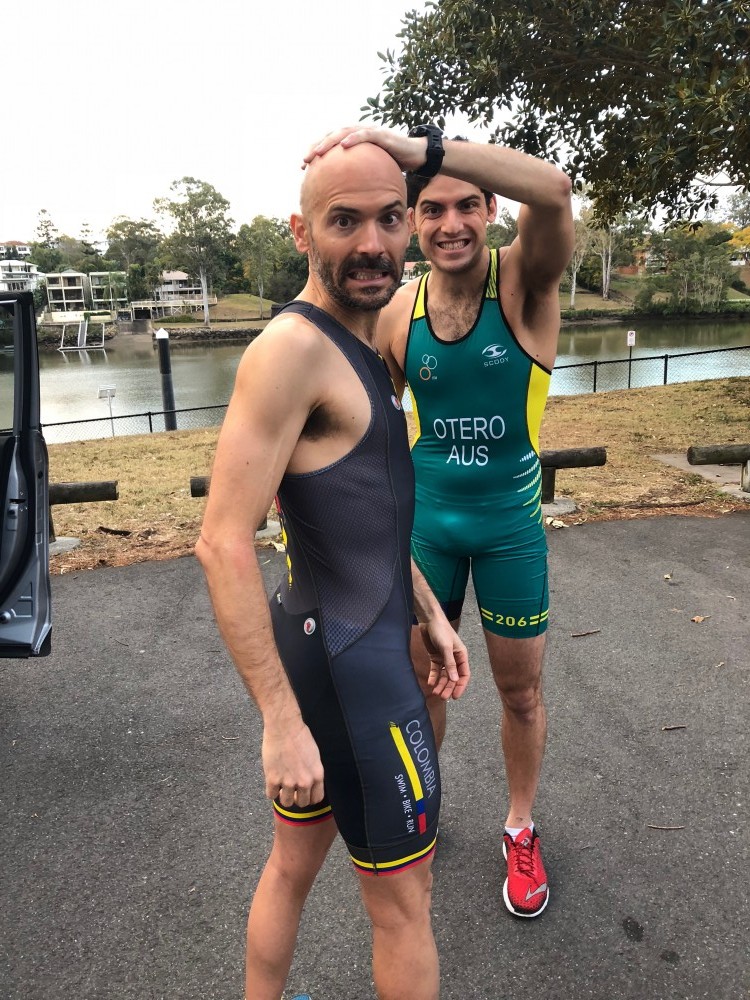 Andrés Otero Forero
Do you have an interesting story to share?
What more interesting story that father and son representing two different countries in the Gold Coast World Triathlon Championships. I represented Colombia and my son, Simon Otero, represented Australia. First triathlon we did together was at Lake Nojiriko, in Japan. I have beat him in the past but he is now too fast for me. Regardless, we have a great time together, as always.

How did you get into the sport of triathlon?
When we migrated to Australia, in 2007, I started doing adventure racing. At the end of that year my partner left. During 2008 and 2009 I tried to form a team for adventure racing but for various reasons this never happened. In 2010 I decided to do an individual sport and since Simon was swimming at UQ I knew some of the people at their triathlon club. Then I bought my first ever road bike as well as Simon’s bike and I learned how to swim. Since then we have been doing triathlons.

What is your favourite discipline and why?
It used to be the running but since I am getting old I have to say that my favourite discipline is the bike because it doesn’t put that much of a toll on your body. Apart from that, training in your bike is a pleasure, you ride 50km and you find yourself in front of the ocean or in a mountain. The luxury of living in Brisbane (Queensland, Australia).

Are you part of a triathlon club?
Yes, I am part of the University of Queensland Triathlon and Adventure Racing Club.

What does the triathlon community mean to you?
Camaraderie and having people around you that understand that you are a social freak!

What does it mean to represent your country for triathlon?
It is an honour and I am humbled to represent Colombia.

Who or what inspires you?
Inspiration comes from different sources. I get inspired by the people I work for (culturally and linguistically diverse, including people from refugee background), their resilience and strength. I get inspired by my family, who for sure will be cheering from the distance via FaceTime. Stories of men and women with disabilities who compete in triathlon.

What does your race morning look like?
I don’t change my normal routine. The night before I tend to eat exactly the same as always (breakfast for dinner). I also do the tattoos that night and leave everything ready to take to transition.
My routine involves toilet time, sunscreen, putting on the tri-suit and breakfast, toast with peanut butter and banana. Apart from that I like to wait until the last minute to get to the starting point.

Why triathlon?
Why not? Well because I am not a good swimmer, not a good cyclist and not a good runner, so then you do the three of them together and voila, you end up representing your country in the World Triathlon Championships.
Just do it for the fun of improving your previous times, for the fun of a hard training session, for that feeling of constant pain, for the fun of waking up at 4:00 in winter, and for the fun of crossing the finish line.

Simon Otero
Do you have an interesting story to share?
Yes I have, my dad represents Colombia and represent Australia and we’ve competed at the World Championships together. We both ventured into this triathlon life together, after migrating to Australia. We have done many events together over the years, with him beating me or me beating him, although he is getting old, he’s still as fast as ever, so I’ve had to up my training to make sure I get bragging rights in the house.

How did you get into the sport of triathlon?
I got into triathlon after my swimming coach started taking the squad to do some cross training with the UQ triathlon club. When the 2011 Brisbane floods happened, I increased my rides and runs as I waited for the pool to re-open, by the time it re-opened I had well and truly caught the triathlon bug.

What is your favourite discipline and why?
Despite starting out as a swimmer, I’d have to say that my favourite discipline is cycling. I love it because of the adrenaline rush I get while I’m out on course, especially cycling past spectators at flying speeds and hearing all the cheers.

Are you part of a triathlon club?
Yes, I am part of the University of Queensland Triathlon and Adventure Racing Club, also known as the UQ Triads.

How motivated were you ahead of the 2018 Grand Final?
Super motivated! I raced last year at Rotterdam and the atmosphere was amazing, the feeling of representing your country and racing against people from all different kinds of backgrounds but that somehow have the same passion is amazing.

What do you most look forward to when racing at the World Championships?
The main event, racing against all the different nationalities, it is an amazing atmosphere. Also the Parade of Nations.

What does it mean to represent your country for triathlon?
It means a lot, I started triathlons after I migrated to Australia with my family, it is very special to be representing a country which has shaped me into the person I am today and that has given my family and I great opportunities over the years.

Who or what inspires you?
It is hard to pinpoint one exact thing, I think there’s a variety of things that inspire me. My family for sure, they have always supported me with all the different sports I decided to do when I was growing up.

What does your race morning look like?
My race morning generally involves having half a bowl of cereal with a banana. This is followed by video calling my extended family in Colombia and getting those last minute cheers from them. Depending on how much time I have in the morning, then I start watching memorable sporting moments on Youtube to psych myself up before the race.

Why triathlon?
Good question, one that I often ask myself after those hard training sessions. I’ve always enjoyed swimming, cycling and running so it was a no brainer that this was the sport for me. It’s taken me to many different places around the world, from little towns in Australia all the way to places in Japan and France.
I had the opportunity to race last year at Rotterdam, this year I was able to race alongside my Dad. We’ve been training together for many years now, which in one way or another has led us to the very unique race that is the World Championships. I can’t wait to race alongside him at an international level and each representing different countries.

"On the next episode of the World Triathlon podcast we speak to the inspirational Noor Khouja, a key figure at the h… twitter.com/i/web/status/1…" - 7h ago...