IOC Member Marisol Casado was re-elected as President of the International Triathlon Union at the 29th Congress on Sunday December 12 in Madrid for a third term. Casado was first elected as ITU’s President in Madrid eight years ago. 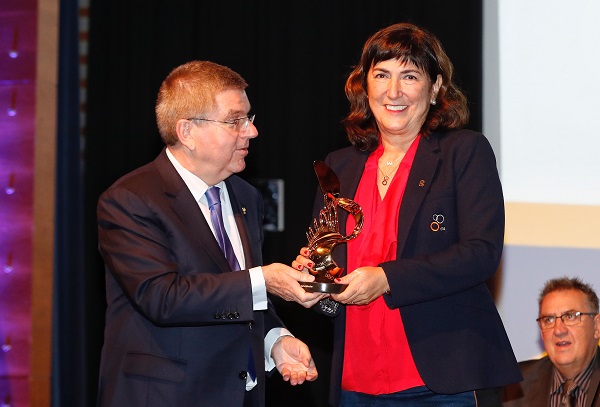 “Thank you from the heart for nominating me as President of ITU,” Casado said. “Thank you for believing in my vision, in my leadership, and where I want to take the sport. It is a great honour to be given the responsibility of directing ITU another four years.”

“I received a great legacy, and we are in a very positive situation at ITU. We’ve done a great job as a team, our athletes are really happy with what we are doing for them, and we have to keep moving in the same direction. We will think about possible changes and, if needed or if we think changes can improve our sport, we will make those changes. We will do whatever is necessary to keep our sport on the spotlight. Triathlon is a loved sport among young people, and we have to continue being popular.”

IOC President Thomas Bach, who spoke early in the ITU Congress, praised Casado and ITU as a good example of good governance and sustainability. Bach also thanked Marisol for “her always positive approach to sport, all the initiatives to include Paratriathlon under the triathlon umbrella and also included in the Rio Paralympics, and her willingness to adopt the Agenda 2020.” Loreen Barnett (CAN), Antonio Alvarez (MEX), Ria Damgren Nilsson (SWE) and Shin Otsuka (JPN), all of whom had previously served on ITU’s Executive Board, were elected as Vice Presidents.

Debbie Alexander (RSA) and Barry Siff (USA) were re-elected, while Ian Howard (GBR) joins the Executive Board and Terry Sheldrake (NZL) returns to the Board in a new position.

ITU Board Members Bill Walker (AUS) and Dr. Sarah Springman (GBR) opted not to run for re-election. However, after serving as a dedicated member to the Board for many terms, Walker was named an Honourary Member, joining Springman who is an Honourary Vice President.

In its first meeting as a new Board, they voted to make ITU Director General Antonio Arimany the Secretary General, which is an appointment non-voting member of the Board.

In the interest of good governance, a resolution passed at Congress on Sunday prior to voting to set the term limits of an ITU President to three.