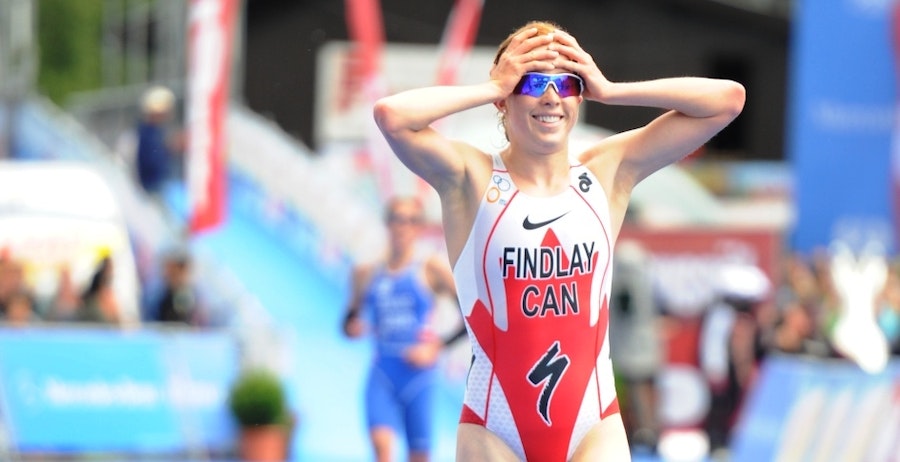 A group of five Canadian athletes are determined to deliver a knock-out punch when they step into the Olympic triathlon ring for the 2012 Games in London, July 27-August 12.

Three men and two women, including three athletes with Olympic experience and two making their Games debut, will wear the Canadian flag when they step into London’s Hyde Park for the triathlon events, August 4 (women) and August 7 (men).

“We have selected a unique group of experienced athletes who have demonstrated over the last Olympic quadrennial that Canada has the ability to contend with the world’s best athletes in the sport of triathlon,” said Alan Trivett, executive director, Triathlon Canada. “This group has endured significant highs and lows in their journey to qualify for London, but have not lost sight of our collective goal of seeing the Canadian flag raised above the triathlon podium.”

One of Canada’s most accomplished Olympians, Simon Whitfield, will headline the list of names while making his fourth trip to the Games. The Victoria resident captured the hearts of the nation with his thrilling gold-medal victory in triathlon’s debut at the 2000 Games in Sydney, and his silver-medal charge in Beijing in 2008. Following a very targeted race plan over the last four years in an effort to peak in London, Whitfield, 37, will look to shock the world one more time in hopes of winning his third Olympic medal for Canada.

Whitfield will lead two other Canadian men who recently completed an epic two-year journey to secure three spots for the Canucks in London. Kyle Jones will make his Olympic debut in 2012. An alternate at the 2008 Games, Jones has made huge strides to develop into an elite racer over the last two years. The 27-year-old is coming off career-best top-15 performances on the ITU World Triathlon Series, has won three Continental Cup races in 2011, and finished fourth at the Pan Am Games and Edmonton World Cup last year.

Brent McMahon earned a return trip back to the largest sporting spectacle after not making the team in 2008. The 31-year-old secured the third Canadian spot at the final qualification race in Madrid to wrap up a grueling journey around the world over the last 18 months. The 2004 Olympian had a monster task in front of him to rack up enough points after being sidelined for 18 months with a career-threatening knee injury. Nothing short of remarkable, McMahon executed his plan to near perfection while capturing his first World Cup victory in Hungary, winning the bronze medal at the Pan Am Games, and also added three bronze medals in Continental Cup races along the way to consistently placing in the top of the pack at World Triathlon Series races.

Meanwhile, an Olympic veteran and a rookie will represent Canada in the women’s Olympic triathlon race.

Kathy Tremblay will make her second-straight trip to the Summer Games following a best-ever start to the critical 2012 season. Battling to fight her way into top-25 over the last three years, the gutsy 29-year-old Tremblay captured her career-first World Cup victory in Ishigaki, Japan this spring, one week after posting her best finish on the World Triathlon Series when she was eighth at the season-opener in Sydney, Australia. Tremblay will be joined on the start line with one of the brightest young stars in the sport, Paula Findlay, who will look to be fully recovered from a nagging hip injury in time to make her first Olympic appearance. The 23-year-old Findlay’s quick surge to the top of the international triathlon rankings over the last two years has been nothing short of incredible. The Edmontonian’s historic golden run began in 2010 when she shocked the world to win on the Olympic course in London in just her second-ever ITU World Triathlon Series race. She followed that performance up with a victory two weeks later in Kitzbuhel, Austria before a fifth-place result at the Grand Final in Budapest, Hungary in September. Findlay crushed any doubts she may be a one-season wonder by winning the first three races last year: on the iconic course in Sydney, Australia; in Madrid, Spain; and she successfully defended her title in Kitzbuhel.

“When healthy, this is truly one of the most talented Canadian teams in our sport’s history heading into an Olympics, which is a testament to the continued strength and growth of our national program,” said Trivett. “Through the generous support and leadership of Own the Podium, along with our corporate partners, we have been able to deliver the resources our athletes required to reach this point.  We are now fully engaged in completing our journey with the aim to contribute to the Canadian Olympic Team’s goal of finishing in the top-12 of the overall medal count. Our team of athletes, coaches, medical practitioners, national staff and Board of Directors are committed to achieving Olympic excellence in London this summer.”

Each of the Canadian athletes will continue following their individual training and competition plans, both domestically and abroad, leading to London.

Triathlon Canada is the governing body for triathlon in the country. Recognized as an Olympic medal sport since 2000, Triathlon Canada’s mandate is to promote, foster, organize and develop the sport of triathlon, and its related disciplines, in Canada. For more information on Triathlon Canada, please visit us at www.triathloncanada.com on the Internet.

ATHLETE QUOTES
Kyle Jones:
“My father was a canoe coach at the 1984 and 1988 Olympics. I was born in 1984 so was pretty young, but I was surrounded in that Olympic environment at an early age. It definitely became a lifelong goal of mine so it is a thrill to finally achieve it. I’m really looking forward to doing some hard training over the next month to prepare for this race.”

Brent McMahon:
“It has been a long but condensed effort to qualify because I did 20 races in 12 months. It has always been a lifetime goal to compete at the Olympics and to do it twice is very gratifying. My main goal now is to maintain my health leading into the Games. Getting really fit is the focus so I can go out there and have the best race of my career.”

Simon Whitfield:
“The first step was to get on the team, and the second step was to get a full squad of three men qualified for London. I have great camaraderie with Brent and Kyle. Having three athletes on the start line will give Canada a better chance to achieving our goal in 2012.” “Two years ago I didn’t think that it was even possible to compete in London, but when it became a realistic possibility, my whole focus has been on getting on the team. I’m really excited and appreciate the effort our Canadian women have made to earn a second spot. I’m also excited and happy for our men to have earned three spots in London. I think the fact we are sending a full team is a bit victory for us. It is great that this is now official, and I’m looking forward to racing at the Olympics with Kathy (Tremblay).”

Kathy Tremblay:
“There was no second option – the plan this year was always to qualify for the Olympics so it is gratifying to have that finally realized. There has only been one other woman in Canada to compete in two Olympic triathlons so it is a real privilege to be going to my second Games. I have been training very hard, and I believe if I can get into that lead pack out after the swim in London anything can happen.”