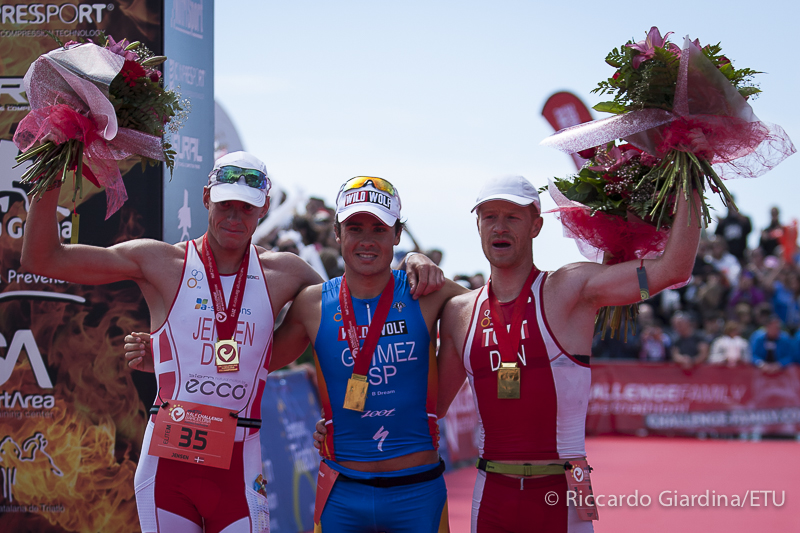 The Spaniard, making his middle distance debut, was never far from the front of the race throughout the course and when he left T2 in first place he continuously increased his advantage to finish in 4:05:17, six minutes ahead of the runner up.

After the race, the Champion said: “I only have one word: spectacular. In the beginning, I tried to manage my effort in the very demanding cycling segment, but when I saw myself getting comfortable and securing enough margin, I decided to enjoy the run course and its public.

“I am very happy with my result, the atmosphere and the great organization of this Challenge competition.”

The male Elite group started at 7am on the beach of Calella, for an intense and spectacular day.

After T1 start, Toft led the first kilometers of the bike segment, whilst Gomez exited in second position and Yaroshenko and Italian Alberto Casadei following closely. In the downhill section, Gomez launched an attack and managed to overcome the Dane and get in first position.

After that, the Spaniard continuously increased his advantage, entering T2 and easily facing the final 21 km run, until he crossed the finish line victoriously.

Denmark’s Martin Jensen and Jens Toft completed the podium. Jensen, who was unable to compete throughout the major part of 2012 due to injury, was satisfied with his race: “It is a spectacular circuit that I thoroughly enjoyed and I am really happy with my silver medalist position, especially since I have only recently recovered from my injury.”

Beforehand, the race was billed as Javier Gomez vs Chris McCormack. The Australian legend finished 7th overall and said: “I travelled a long way looking for a challenge, and I found it.

“It was a hard race, a very good training at the beginning of the season. Furthermore, I have been able to enjoy it alongside Javier, an incredible person with whom I can find no fault; he is extremely talented and very classy.

“I would feel privileged if he would succeed me in this distance; it has been a real pleasure to compete with him in a town like Calella and with the spectacular organization provided by Challenge.”